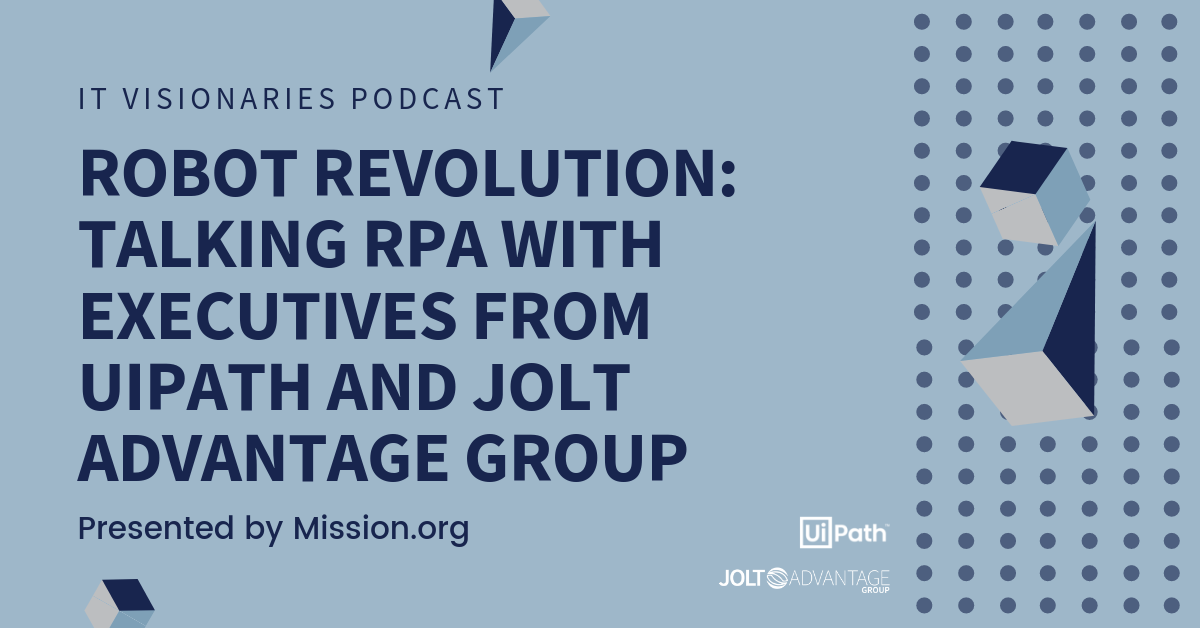 When you picture a robot, what comes to your mind? Is it R2-D2 or Terminator? In today's digital world, robots interact with humans on a daily basis, some of them work in manufacturing factories as industrial robots, others work vacuuming your house, entertaining your kids or serving food in Japan. However, many people don't realize that when they are submitting an insurance claim via their insurance company's website portal or starting an online customer service chat, they are actually interacting with software robots programmed to perform a specific task powered by an automation workflow or AI.

Recently, our CEO, Jordan Collard, had the honor to be invited to record a podcast interview with Guy Kirkwood, chief evangelist from UiPath, the leading software platform for Robotic Process Automation. The podcast was hosted by Mission Podcasts' IT Visionaries, a prominent source of exclusive interviews with trailblazing IT leaders, sponsored by Salesforce's Lightning platform.

Together with IT Visionaries' host Ian Faison, they explore the different facets of digital transformation and how software robots powered by Robotic Process Automation technologies have influenced the way organizations across all industries and geographies work nowadays, as well as how it will revolutionize the future of work for humans.

As part of their conversation, Guy brought up fascinating stories about the rise of UiPath and how they became the fastest growing software company in history and the world's #1 RPA platform selected by 60% of Fortune 500 companies around the globe.

Guy shared a number of captivating customer success stories, such as how a learning development manager who has been working for a Singaporean company for the last 46 years and has zero technical skills was able to automate her weekly reporting task comprised of generating 50+ reports which typically took her 4 hours in a manual workflow to an astonishing 1 min total time. Effectively eliminating the mundane and repetitive tasks that she used to hate doing. And how Japan was the number country on RPA adoption with 80% of Japanese Fortune 500 companies being UiPath customers.He shared that the reason Japan has seen such a tremendous growth in RPA adoption, is due to the fact that the Japanese population as a whole peaked in 2010, with large groups of baby boomers retiring and the overall working population quickly declining, it has forced the average Japanese worker to put in 60 hours-100 hours a week reaching dangerous levels of work-related health issues. But since the implementation of RPA, organizations have finally been able to give
significant amount of free time back to their workers and thus increasing employee satisfaction, productivity, and business outcomes.

Competitive advantage was another subject that was highlighted during the interview, early adopters of RPA hardly wanted to mention their success publicly to avoid competitive bench-marking in order to continue to outperform their rivals before others can catch up to their digital innovation weapon. However, the secret wasn't held for too long as the awareness of RPA spread like fire over the last few years and quickly became the #1 technology investment for CIOs and business executives of enterprise level organizations.

As an example of the undeniable competitive advantage that RPA brings to organizations, Jordan mentioned one of JOLT's customers in the advertising industry with a franchised model that was struggling to expedite their month end financial report as it took them 16 days to close their books and share the reports to their venture capital group, which delayed significantly key financial and strategic decisions. However, it took only 4 weeks for JOLT experts to implement UiPath and build a bot that would automate the 60+ franchises month-end close reporting from 16 days to just under 4 hours total. Enabling board executives to review their financial results on the actual month end, instead of waiting until mid-month to review.

What UiPath focuses on and how JOLT fits in

After raising about $1 billion in funding, Guy explains that UIPath has a plan to use that money on three key focus areas: A.I., education, and partners.

Jordan says that Jolt AG is looking to strap itself to the rocketship UIPath is launching. But for each company to succeed, there needs to be an awareness built among the customer base. To do that, the two companies work together to put on workshops and training programs that are designed to not only inform participants about RPA, but allow them to build and take home an RPA robot so they can see the utility of the technology. Each company is also working to get RPA curriculum into schools and universities.

A crash course in RPA

Robotic process automation is kind of like an operating system, Guy says. What RPA does is move through all of the applications and systems on your computer and automate processes that are time-consuming or inefficient. The RPA runs through a process exactly how a human does, but on its own. There’s always a fear that robots and automation will take jobs away, but in fact, both Jordan and Guy say that isn’t the case. Rather, once RPA is implemented — which is relatively easy and cheap — the RPA can live on doing the work that’s necessary but tedious, allowing the human assets to focus on high-level work.

The RPA industry is growing rapidly. In the last two years, UiPath went from having five total clients from the Fortune 500, to working with more than 60% of companies in the Fortune 500.

But RPA has its limits. Guy uses a golf analogy to explain where RPA can fall short, saying that the RPA is the driver in your golf bag, but in order to complete the hole, you need other clubs as well. So with RPA you can get yourself started on a great path, but you need tools, systems, and processes to make the entire organization run.

“It was considered to be sort of macros on steroids. So [it’s like] if you write a macro for an excel sheet, you can consider RPA to be a macro across every organization and every system that sits within those organizations.” —Guy

“Once people are able to see not only how this robot will be able to do that same process that they do, but how they execute it much faster with 100% accuracy and do it as many times as they want they have that ‘Aha’ moment.” —Jordan

The future of RPA

It is not impossible that within just a few years, RPA and A.I. will become ubiquitous in all industries. There is a possibility that RPA will become a productivity tool in the same what that Word and Powerpoint did in offices everywhere.

Guy explains it by saying A.I. is like the new electricity. Automation is going to disappear and you may never think about it or really notice it. And that is not because it’s not used, but because it’s going to be used everywhere all the time. You’ll use it so much you won’t have to think about it. Because that’s the case, Guy again stresses that education will be important as RPA becomes more heavily used so that people can understand the technology and the impact it will have.

“The value of partners is that we can scale so much faster and the value add that they provide in terms of the relationship with the C-suite of their clients is so much stronger than we could ever have.” —Guy

Building an ecosystem of customers

Putting products into the hands of potential customers is the best way to build up an ecosystem. Guy advocates giving away a ton of stuff for free.

To listen to the full podcast episode, please visit our Podcasts page. 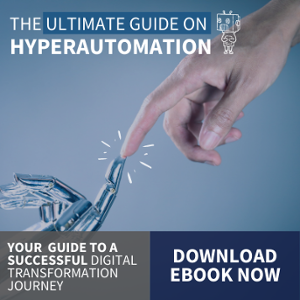 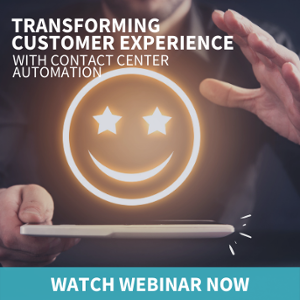 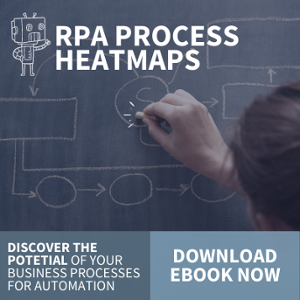 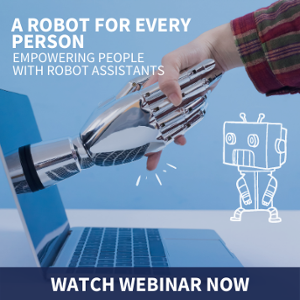